Stories about life; past, and present

Do you believe in guardian angels? Do angels really rescue people?

I remember this painting or print that my grandmother had in her living room. The evangelist Billy Graham even answered the above question with this quote from the Bible: “God will command his angels concerning you to guard you in all your ways” (Psalm 91:11).

I seem to have started my acquaintance with angels at an early age. I wrote previously about hanging myself at the age of 6. My intention was to see what being hung felt like. I didn’t know it could kill me.

I can’t help but think that a guardian angel protected me from death long enough for my sister to see me hanging, run inside, yell over the Dutch door at the top of the stairs for our mother, then for our mother to run up the stairs and rescue me. If Dawn had been one second later calling for our mother, her calls would have been inaudible over the noisy washing machine.

Thankfully mother heard Dawn’s calls and got there in time. And not a moment too soon! I don’t remember anything after trying to reach the swing with my foot unsuccessfully! Someone was watching out for me.

Am I Just Lucky?

Bad things have happened to me, just like everyone else. But for some reason my life has been spared. I hope it is because I have a purpose to fulfill yet.

I almost died when I had abdominal surgery. I had been on a medicine that prevented extra heartbeats from occurring which also slowed and regulated my heart. While the surgeon was operating, my heart slowed way down. The anesthesiologist quickly gave me a drug to counter the effects of the medicine and speed my ticker back up again. Boy was I surprised to hear about that afterward!

My life was spared yet again many years ago after working a 12 hour night shift in ICU, I came home to find that my baby boy and husband were quite sick from a virus. I think they had been vomiting so they both needed my help at least for the first part of the day after I got home. They seemed to improve as the day wore on.

After finding that there was no one who could work for me that night, I slept only about two or three hours. Being young and foolish I thought I could work another 12 hour shift and drive the 20 or thirty minute drive back home in the morning.

The next morning after working 12 hours, I, in my stuporous condition, was not thinking very clearly. I was dozing off  and on while driving along the four lane highway to home. Thankfully we lived near a small city and the road was not very busy at that time of the morning. The weaving got worse as I drove down the last part of the trip on a two lane country road to our home. I kept thinking I could make this last little part of the trip okay.

But I literally lost consciousness while driving and awoke seconds later when I realized that my car was driving down a ditch on the right side of the road at a seemingly high speed! I jerked the steering wheel to get out of the ditch and crossed the road but couldn’t straighten the wheel after that. The steering wheel (?) was jammed.

I continued at a 45 degree angle across the road, passed over the opposite ditch. I do not remember it but my tire tracks were visible on the telephone pole that I evidently rolled across while the car was on two wheels! I have no idea how that happened!

Somehow the car continued another 20-30 feet. When I saw a tree right in front of me and my out of control car was hurtling toward it, I remember thinking quite calmly, “Okay, Lord. This is it.” I have always felt close to God and felt prepared for the eventuality that I would die some day.

I missed the tree trunk by inches and hurtled another twenty or so feet into the corner of a brick house. I had my seat belt on or I would have been thrown into the building! I was still alive!

After I turned off the highway a woman had been driving behind me and saw everything. She knew I was in trouble and was horrified as she watched everything happening. After the crash she ran to my car worried that I would be dead when she got to me. But I was quite alive, just shaken up.

The owner of the house ran out of the house terrified thinking due to the impact of my car hitting his house, that a transfer truck had run off the road and hit his corner room where he was vacuuming! He was amazed to see only me and the car outside.

Thankfully only twenty bricks in the corner of his home were damaged and needed replacing. I was unharmed; no scratches, no bruises.  My car was totaled. I called the insurance company and the nice lady drove me the few blocks to my home. My husband left me to go back to the accident to handle questions, etc.

The weird thing is I had no control of the car once it left the road. Someone was driving it for me or guiding it. It was just not my time to die. I believe I gave my guardian angel quite a scare that day.

In the future if I got sleepy I drank some coffee or pulled off the road to take a quick nap! Perhaps that accident was the wake up call to prevent another worse accident later. I made an effort to try to get plenty of sleep before working after that. My husband did his best to see that I did too. I am thankful that I was spared that day.

Have you had an accident where you felt protected by someone? Please respond if you feel inclined to. No judgments made here! 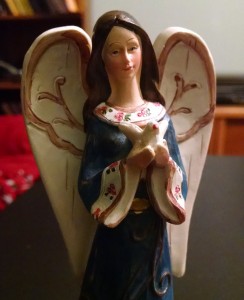 21 thoughts on “My Poor Guardian Angel(s)”

This site uses Akismet to reduce spam. Learn how your comment data is processed.